“Where can I get a Chinese Reflexology stick?” is one of the most commonly asked questions from readers. If you’ve signed up for my free reflexology charts and online lessons, you’ll hear me extolling the virtues of a reflexology stick and it’s simply so enticing, who wouldn’t want one!

If you don’t know what a reflexology stick is, it’s basically a small wooden rod that tapers into a rounded point at the end. Here’s a picture of what one looks like. 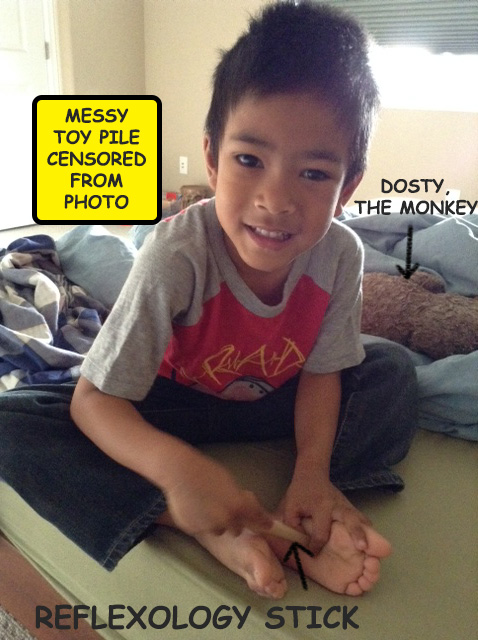 As you can see, it’s fun for everyone, especially my 4-year old son.

The point of this photo other than to show off how cute my son is, is to illustrate how simple and easy it is to use a reflexology stick. My son loves having his feet massaged. I usually use my fingers and thumbs to rub his feet, but now that he’s getting older, he sometimes asks me to use the reflexology stick on his feet.

The reason why you might want to get your hands (and feet) on a reflexology stick is because it can powerfully move your Qi. Like, we’re talking at least ten times more powerful than simply massaging with your fingers or knuckles.

A reflexology stick is the heart and soul of this style of Chinese Reflexology. So, you may be wondering, why am I holding out on you? Why aren’t there sticks galore available for sale on this site?

There’s a very good reason why I don’t sell reflexology sticks and don’t recommend people get one (explanation to come). In fact, in all of my workshops and self-study guides, I teach the “gentle” method of Chinese Reflexology.

This is where you use your fingers, thumbs, and knuckles to massage your feet. It’s very similar to the people you see in the park practicing Tai Chi. Most people don’t realize that Tai Chi is actually a deadly martial art. Chances are those people in the park have no clue that when they’re twirling their hands, they’re actually practicing a motion to gouge out an eyeball.

Even though they’re not practicing Tai Chi as a martial art, the movement and flow of the postures is still very beneficial for the body. This is the same for the gentle method of reflexology. It may be subtler and changes may take longer to happen, but there’s still great benefit in massaging the reflexology points on your feet regularly.

However, I understand we all want the shortcut and we want the fastest way to get well and improve our health because once you get sick of feeling sick, you’re ready for change.

I can’t tell you where to buy a reflexology stick with good conscience for two reasons. However, if you read them both, I promise to tell you how you can get one. Here are the reasons:

A reflexology stick enables you to massage more intensely and in a more focused fashion. You’d think that you would feel less in your feet by using a stick, but you actually feel more. By “feeling”, I’m talking about the sensation of feeling uric acid crystals under the skin as opposed to the intensity of the feeling (aka pain in your feet).

Uric acid crystals build up in reflexology points on your feet where energy is blocked in the corresponding area of the body. Occasionally, these clusters of crystals make a crunching sound when massaged with a reflexology stick. That’s why I sometimes refer to them as, “crunchies.”

If you try to use your fingers to locate these tiny crystals, it’s akin to pressing your hand on a mattress to find a pea underneath. Most of us aren’t the sensitive princesses in the princess and the pea story, which is why you need a reflexology stick. The stick lets you easily feel the crunchies and helps break them up, and thus, clear the energy block in your body.

As well, when you have a reflexology stick, it’s easier to massage all the reflexology points on your feet. Using just your fingers and knuckles can get tiring if you have to massage for longer than a few minutes.

However, the biggest concern with powerfully moving Qi without proper instruction is that you can seriously mess yourself up. I know from firsthand experience. Years ago, when I was studying Chinese Medicine at Five Branches University, I had just learned about tonifying herbs that raise the Yang.

At the time, my Yang Qi was a little low, so I figured I’d go out and buy some of these herbs to make some soup. They’re good for you, so what was the harm? I didn’t follow any herbal formulas and I made a tasty broth that I drank over several days.

By the end of the week, I had given myself severe insomnia because I had not included the counterbalancing herbs. I didn’t know enough to understand the relationship between the herbs. This omission resulted in herbs that raised my Yang Qi so much that it got stuck in my head and gave me insomnia.

So, please don’t make this mistake yourself. It may seem like a simple wooden stick, but it’s incredibly powerful and causes energy to shift much more quickly and intensely than merely massaging with your fingers.

It takes time and commitment to master using a reflexology stick, which is why I only teach this to students who are interested in learning the complete system of Chinese Reflexology. Hmm, this is a hint of how you can get a stick. Read on…

2. Nobody sells them in North America – I had to make my own

Real Chinese Reflexology, not the happy foot massage for $20, is not very common in North America. I only know of a handful of true practitioners and all of them live near Toronto, Canada, and learned from the same teacher I did.

My reflexology instructor had his sticks made by one of his students who ran a woodworking shop. When I began teaching, I didn’t have a source for sticks, so I did what any enterprising mom would do. I enrolled in a woodworking course at my local Parks & Recreation department. With very little “handyman” experience (okay, none), I learned how to use a circular saw, mini lathe and belt sander.

By the end of the program, I was awkwardly sharpening lathe cut off tool blades on a massive spinning grinding stone. Everyone kept asking me what I was making as I churned out dozens of little sticks. I use the word “churn” liberally because that generously describes my woodworking skills. It was more like I snailed them out.

You can actually buy a reflexology stick online, but once you read what I’ve written below, you never will (spoiler alert).

It used to be that you couldn’t buy a reflexology stick anywhere. Believe me, I scoured the Internet looking for where I could buy some before I enrolled in a woodworking course.

That said, I did an online search recently and found that you could buy a Thai reflexology stick on Amazon and Ebay. Now, I’m going to ruin it for you. Don’t buy them!

Why? They’re made from rosewood and other exotic Asian woods, which happen to be endangered. Yes, ALL of them are made from rare Asian exotic woods. I noticed some sellers are getting creative in their descriptions to hide that forests are being pillaged to sell a $3 stick to people living in first world countries. Chances are, the wood to make that stick is deforesting sensitive ecosystems of rainforests through a slash and burn method. Just Google “rosewood endangered” to learn more.

It’s like palm oil. I never thought much of it as an ingredient in food until I learned that orangutangs were being murdered and slaughtered so that someone could get some white filling in their Oreo cookie.

Now that I’ve told you where to buy one, if someone reads this and still buys one, let that rest on your guilty conscious forever. I can understand the rationalization process. How can one little stick of wood matter that much? You’ll use it for the rest of your life and you really need that stick to improve your health or help someone you love.

To that I say, energy healing is not just about massaging your feet. It’s also very much about how you FEEL and our interconnection to the planet and the energy of the Universe.

Knowing that the stick in your hand came at too high a cost (and I’m not talking about the three bucks to buy it), will influence the effectiveness of the foot massage. If you buy one, after reading this, you’ll ALWAYS look at it and know that you deforested a rainforest for that stick in your hand.

True healing and abundant health and vitality is about appreciating our interconnectedness, not grasping out of fear and selfishness. Amazing health comes from releasing fear and opening ourselves to the highest energy of love.

There is a Source of reflexology sticks 🙂

I promised I’d tell you how to get a reflexology stick. There IS one source of reflexology sticks where they have been lovingly handcrafted from sustainably forested wood. That would be me. I have my own mini-lathe and I make the sticks from scratch and bless them with love and infuse them with positive energy.

But, you can’t buy them from me. You can only get a reflexology stick if you are committed to learning the complete system of Traditional Chinese Reflexology. Knowing all the points is infinitely more transformational and powerful for turning your health around. That’s because the best way to create amazing health and vitality for yourself is to heal you body as a whole. The sum is greater than the parts.

So, if you’d like your very own 10x-more-powerful-Qi-shifting-healing-tool, you’ll have to keep an eye out for when I offer my Sole Mastery program on Traditional Chinese Reflexology. I teach these programs usually once a year (sometimes twice) and all students who sign up for the program receive a GIFT of a lovingly handcrafted reflexology stick.

To be one of the first to know of when program registration is open and early bird registration savings, simply sign up for my newsletter. If you’re already a subscriber, you’ll always get the latest information first.

15 thoughts on “Where to Get a Chinese Reflexology Stick”