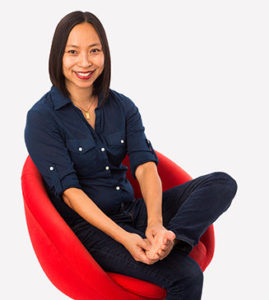 Holly is also a Dragon Spirit Guide who can tune in to people’s vibrational energies. She specializes in connecting people with the life force energy of the Universe. She integrates Dragon Spirit healing with her Chinese Reflexology sessions so that people can bring their bodies back into balance and heal faster by releasing negative emotions and subconscious thoughts held in the body.

If You’re Curious, Here’s My Story

At the age of 25, I was in a car accident that left me with chronic neck, shoulder and back pain. The regular doctors had nothing for me other than, “Take some aspirin”. The accident propelled me to explore alternative healing where I found some relief from the pain I experienced.

However, it took two significant shifts in my beliefs before the real healing began. The first shift occurred when my boyfriend asked if we were still going to bicycle across Canada as we had planned before the accident. I was about to say, “No,” when I heard a voice inside me say, “If you say no, this car accident will define you for the rest of your life.” Thankfully, I listened to my inner voice and said, “Yes”.

The second shift came when I attended a movement workshop and the instructor told the story of how her ankle had been run over by a car. She released the emotional trauma from the event and after she left the hospital, her ankle didn’t swell up and was fine in just a couple of weeks.

Her story opened my way of thinking. I had always thought that I would have residual pain from my accident, but I suddenly realized I didn’t have to live this way. My mind held the power to heal my body. From those two mind shifts alone, I was able to recover 95% from the car accident. In less than two years after the accident, I was strong enough to bicycle 3,500 kilometres across Canada.

There were still a few lessons for me to learn…

Despite this incredible recovery and amazing discovery of the power of the mind to heal, I made some poor choices and found myself in a work situation that was extraordinarily stressful. When work got particularly stressful, my health began to fail. I visited the hospital emergency room three times in 9 months, and experienced multiple infections and bizarre illnesses. Over the course of a year, my health deteriorated so badly that I wondered if I was dying.

Every Western doctor told me my tests were normal and that I was perfectly healthy, despite feeling sicker than I had in my entire life. Alternative healers gave me multiple treatments and remedies, but nothing seemed to help.

Finally, my husband (who was my boyfriend at the time) suggested I see his Chinese Reflexologist. Ironically, for someone who embraced alternative healing, I was entirely skeptical. I asked, “Isn’t that where they rub your feet? How is that going to help me?”

The first time I received a Traditional Chinese Reflexology treatment, I was in tears. It was incredibly painful and according to the reflexology points my feet, all of my major organ systems were a disaster. However, after receiving regular treatments for a month, I noticed the points on my feet started hurting less.

I also noticed that instead of wondering what weird ailment would strike me next, my health stabilized. Once I started studying Chinese Reflexology, my health got even better. Within a year and a half, I felt so good that I was training for my first triathlon. Two years after learning Chinese reflexology, I looked back and realized that I had not experienced a single recurrent pain episode from my car accident. I had recovered 100%.

I wish I could say this was the end of my story and I experienced amazing health from that moment on, but I was particularly stubborn in listening to my head vs. my heart. I continued working in a high stress job and I began having problems with my vision. Experiencing ocular migraines and being diagnosed with early stage macular degeneration was the wake-up call I needed to walk away from my job.

I made a decision to listen to my heart and as a result, my life and health completely transformed. I discovered I could channel the Universe and I embraced the connection between the Mind, Body and Spirit. As a result, I completely healed my eyes and have not experienced a single ocular migraine since.

More importantly, I learned that the key to amazing health isn’t about practicing the perfect health routine or regime. It’s about taking ownership of your health and bringing your body into harmony with its natural healing energy. Now, I simply listen to my body’s wisdom and make small adjustments to “recalibrate” my health.

Listening to my soul connection completely transformed my life. My passion is to make the world a better place, which is why I share what I’ve learned with the world. It’s my wish for you to experience amazing health and vitality, so that you too can live a life of purpose and follow your soul’s calling.

Together, we can change the world for ourselves, our communities, and our children.

16 thoughts on “About Holly”