Would you like to know how the Chinese Reflexology point for the brain can help improve your memory? Read this article to learn more and remember to bookmark this page so that you don’t forget about it! 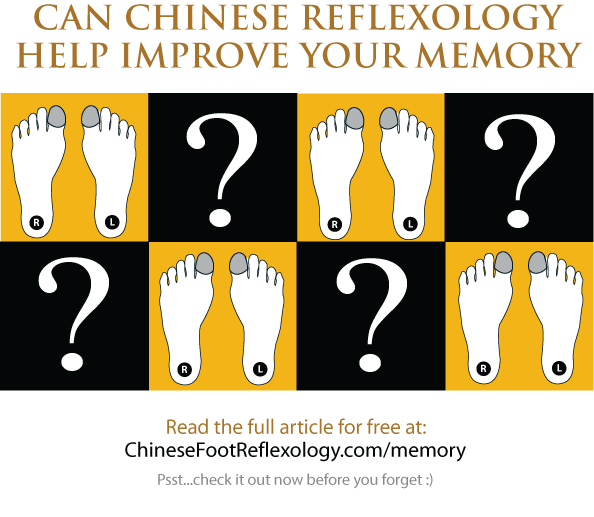 This is actually one of the most popular questions I’m asked when people learn that I practice Traditional Chinese Reflexology. “Can it help me lose weight?” comes in at a close second, but that’s for a future article :).

In the past, I’d answer this question with a generic response about how Chinese Reflexology can help your body re-balance itself energetically to support the natural healing process. However, to be quite honest, I’d never really investigated how memory is directly affected by energy blocks.

I have a stellar memory and since everyone close to me also had good memories, it just wasn’t a priority for me to learn more about memory loss and dementia. Looking after my son full-time keeps me busy, so I have to selectively choose where to invest my time and effort.

Recently however, a close family member asked me to show her if there were any reflexology points to improve memory. She noticed that her memory wasn’t as good as it used to be and she was occasionally a bit forgetful.

I wanted to help her out and I was also curious to know if Chinese Reflexology would be effective for improving memory from an energy healing perspective. I cracked open some of my Traditional Chinese Medicine textbooks and also researched into the Western medicine perspective on Alzheimer’s, dementia and memory loss.

It was very illuminating and it helped me understand what’s going on energetically with respect to brain function and memory. And with that perspective, I could see how massaging the reflexology point for your brain could help prevent memory loss.

From a Western perspective, there isn’t a single cause for Alzheimer’s. It’s likely a combination of age, genetics, lifestyle and environmental factors. Here’s one of the best explanations I found from the Mayo Clinic website:

From an energy healing perspective, the presence of plaque and twisted tangles suggests that energy is not flowing smoothly as it should. Instead, it’s pooling or clumping in the brain. In Traditional Chinese Medicine (TCM), this could be described as a stagnation of energy leading to “phlegm misting the mind”.

The simplest way for me to explain this in layman’s terms would be that because the energy is not flowing smoothly, physical gunk (like my medical term here?) starts to accumulate in the brain, and this messes with brain function. When viewed from this perspective, improving energy flow through the brain is a “no-brainer” for preventing memory loss and possibly even improving your memory.

TCM takes a very holistic view of memory loss because one’s brain simply doesn’t become “misted” on its own. Your heart and mind are supposed to be working in tandem together. When phlegm is misting the mind, it’s also misting the heart. This “mist” is related to the metabolism and transportation of water in the body.

From a Chinese medicine perspective, if there is an energy deficiency in the Kidney and Spleen channels, then water is not being moved through the body efficiently. It begins to stagnate and this results in the formation of dampness and phlegm. From a TCM view, the Heart, Kidney, Spleen and digestion are all major pieces of the puzzle contributing to memory loss.

If I were to cover all of the relevant reflexology points here, this article would turn into a book! As well, since each person’s body is different and there are so many different variables related to the mind and memory, it’s not a simple task to pick and choose a handful of points that would benefit everyone.

That’s why I recommend that people learn and practice the complete system of Traditional Chinese Reflexology. When you know all of the points, you don’t need to try to figure out which points to massage. Your body will tell you through your feet. I teach the complete system in my 6-month program, but you can get started with some of the most powerful and beneficial points by reading my book, Sole Guidance.

In the meantime, while you’re waiting for your copy to arrive ;), this article will focus on the reflexology point that is most relevant to brain function. Surprise, it’s the brain point.

Chinese Reflexology Point for the Brain

Massaging the Reflexology Point for the Brain

As with all the reflexology points in Traditional Chinese Reflexology, you can use your fingers, thumbs or knuckles to massage the reflex areas on your feet. To physically locate and clear the microscopic grains of energy blockages in your feet, a reflexology stick is the best tool to use. The stick enables you to feel the individual grains of uric acid that accumulate in your feet and represent energy blockages in your body.

For the Brain point, use your thumb to press and rub your toe pad in an up and down motion from the tip of the toe to just below the base of the toe pad. As you massage your toe, move across the toe pad from one side to the other. Do this for up to 1 to 2 minutes each day. Repeat for your other toe.

Importance of the Kidney Reflexology Point for Memory

In Traditional Chinese Medicine, the Kidneys store your life essence (life force energy). When the life essence becomes depleted, that’s when signs of aging begin to appear, including grey hair, decline of hearing and vision, weak knees, infertility and memory loss. That’s why it’s so important to keep your Kidney energy strong and healthy. Massaging the Chinese Reflexology point for the Kidneys can help you do this.

If you’re interested in learning more about the Kidney point, including how to locate and massage this point, sign up for free Chinese Reflexology foot charts and a series of free online lessons on how to use Chinese Reflexology to improve your health. You’ll also receive my complimentary monthly newsletter. Simply fill out the form below:

3 thoughts on “Can Chinese Reflexology Help Improve Your Memory?”