Looking for a natural way to boost your immune system? If you’re feeling stressed out, super busy, or you’re not getting enough sleep, this can make you more likely to get sick. Fortunately, your body has its own built-in system to keep you in balance.

According to Traditional Chinese Medicine (TCM), there are 12 primary energy pathways or channels running through your body. These channels influence your energy levels, mental clarity, digestion, overall health, emotions, and more. While this powerful system doesn’t come with an operating manual (unless you include the ancient TCM texts), there are ways to “reboot” and strengthen the system to keep your body healthy and strong.

Your body has two pressure points that help strengthen your body whenever you’re feeling run down and need a quick boost for your immune system. Practice these points daily—they take just 90 seconds to massage—and they’ll give your body a surge of qi (life force energy) to help keep colds and flus away during stressful times.

And if you need a stronger boost because you may already be fighting off a cold, there’s also a 5-minute reflexology cold remedy routine to use when you’re sick. But for now, let’s focus on prevention so that you hopefully will never need the reflexology routine for getting over a cold.

An article on boosting your immune system to prevent colds wouldn’t be complete if I didn’t explain the hows, whats, and whys. Let’s look at this from a Traditional Chinese Medicine (TCM) perspective.

In Chinese Medicine, germs are described as “external evil” or “external pathogens,” which is not all that different from the western perspective. When you’re exposed to a virus, your body can either let it in or refuse it entry—so your body is a bit like a castle defending its gate. Your body can let the invaders into the kingdom, or it can stop them before they even penetrate the wall surrounding the castle.

In Chinese Medicine, the organ (and its associated energy meridian) that maintains your body’s “wall” of protection is your Lungs. It is said that the Lungs disperse wei qi, also known as defensive qi. It’s a special kind of qi that creates a barrier of protection against those pesky evil invaders.

Now if a few sneaky germs find a crack in the wall and sneak through, your body has another organ/energy meridian that also acts as a line of defense—and that would be the Spleen. And in Western medicine, the Spleen plays a role in supporting the immune system by producing white blood cells that help fight infection.

In Chinese Medicine, the Spleen works together with your Stomach to transport food essence (aka nutrients), and also clear out mucus. So in order to help your body repel the invaders, you need a way to strengthen your Lungs and also support your Spleen, which you can do through its relationship with the Stomach.

1. Chinese Reflexology Point for the Lung

The Lung reflexology point is a key point in my 5-minute cold remedy routine, but it can also be used on its own. It’s an outstanding standalone point for boosting your Lung qi, which then helps to disperse the wei qi throughout your body to fortify your body’s protective barrier against germs.

How to Locate and Massage the Lung Reflexology Point

This Chinese Reflexology point is located on the balls of both of your feet. It is a rectangular-shaped area on the ball of the foot below the three middle toes. To massage this area, wrap the fingers of both hands around the foot, and then press deeply into the Lung reflexology area with both of your thumb pads and massage in small circles. After you’ve massaged one spot, move your thumbs across the Lung point and repeat. Be sure to massage the entire Lung area for a total of 30 seconds per foot.

This acupressure point is a classic that is commonly used by acupuncturists for treating patients for a wide range of conditions. This point is especially powerful for improving digestion and for boosting the immune system. It’s also used to treat a long list of conditions, including: stomach pain, hiccups, bloating, nausea, vomiting, diarrhea, constipation, and mastitis.

How to Locate and Massage the Stomach 36 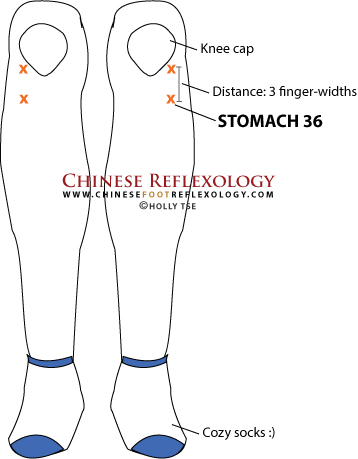 Zu San Li, aka Zusanli or Stomach 36, is located on the front of your lower leg below the knee cap and toward the outer side of your calf, and there’s a Stomach 36 point on each of your legs. There are four steps to locate this point, and I’ll walk you through them for your left leg:

Woohoo! Kudos to you! You just located your Stomach 36 point. Repeat the same procedure (switching sides) to find this point on your right leg.

Another way to look at this point, would be to imagine that you are looking down at a cross section of your lower leg. If you imagine this cross section as the face of a clock, on your right leg, Stomach 36 would be where the hour hand is when the time is between 1pm and 2pm, or around 1:30pm. On your left leg, check for between 10pm and 11pm or around 10:30pm.

You can massage this point on both of your legs at the same time. Make fists with both hands. Reach down to the point, press your knuckles in, and rub up and down. It’s not that unusual for this area to be sensitive, especially if you have poor digestion. Massage up and down with your fists for 30 seconds.

So let’s sum everything up with your daily immune-boosting practice:

And that’s it! Only 90 seconds each day to give your body a boost of qi to help protect it from external evil! Muhaha!

But If You Really Want to Stay Healthy, Read This…

If you really want to stay healthy, you have to look at the emotional roots of why you get sick. Which activities lower your energy defenses and make you more likely to catching a cold? And more importantly, why do you keep doing them?

All the reflexology and acupressure in the world won’t be as effective as simply eliminating the bad habits and poor choices that weaken you body. When it comes to catching a cold, it all boils down to one thing: doing too much. Before anyone catches a cold—with the exception of little kids who are still developing their immune systems and who percolate in a petri dish of germs called school (just kidding!)—the cold is always preceded by trying to squeeze in one more thing.

When you’re feeling stressed and overwhelmed, practicing the two pressure points in this article every day can help your body defend itself against invaders. But what’s even better is to also look at why you’re feeling so stressed and overwhelmed. What changes can you make so that your life is less busy and stressful? Your heart’s probably whispering an answer to you right now as you read this question.

Listen. Your body will thank you.

6 thoughts on “2 Points to Boost Your Immune System”