I get pissed off when medical experts tell people that they’re doomed for life. If you know me, I’m not one who gets angry easily. Recently, I have been actively improving my eyesight using a combination of exercises, energy work and emotional release. The results have been impressive with a 30% reduction in my prescription for nearsightedness and the elimination of astigmatism in my right eye.

The experts say this is impossible. The experts say that my eyes aren’t improving, they’re actually getting worse from aging. They say that it’s because I’m nearsighted and experiencing presbyopia, the decrease of my near vision is compensating for my nearsightedness, resulting in a perception that I can see better up close. That’s the best way I can sum up what standard optometry has to say about improving eyesight naturally.

While I’m sure that applies in many cases, it’s complete hogwash for me. I know that what I’m doing to improve eyesight naturally is working. I know that my prescription only changes when I’ve been actively doing things to improve my vision.

It makes me angry when I see friends who are inspired to begin their journey to see without glasses and their eye doctors tell them that it’s impossible. One friend’s optometrist referred to it as “voodoo magic” and said that my improvement must be psychological even though I have eye prescriptions to prove otherwise.

I’ll save my story for how I completely reversed early stage macular degeneration in my eyes using Chinese Reflexology (according to the experts can’t be reversed, only slowed down) for another post as I could write hundreds of words here.

Eyesight aside, what about people who have defied the odds and doomsday diagnoses? My ex-boyfriend’s mother was diagnosed with leukemia about five years ago. In her sixties, a leukemia diagnosis might as well be considered a death sentence. Not only is this woman alive and well, she’s thriving. She credits her recovery to naturopathy and Kundalini yoga.

My husband was diagnosed with ulcerative colitis in his early twenties. He had a severe case and was passing blood. The experts say there is no cure other than surgical removal of the large intestine and that the only options are drugs to manage symptoms or put the disease into remission. My husband used visualization and meditation to heal himself. He hasn’t had ulcerative colitis in over a decade.

He’s not in remission. He simply doesn’t have ulcerative colitis anymore. We generally eat quite well, but he occasionally eats french fries, potato chips, chocolate, ice cream, etc. without any issues. The experts would probably say that he was misdiagnosed because that’s the only way they can explain it.

When You Shouldn’t Listen to the Experts

Ok, I’m not saying that if your doctor says you need antibiotics to treat an infection that you shouldn’t listen to them. However, it’s when the medical experts tell you that it’s impossible for you to thrive, that’s when a red flag should be raised. When someone’s ego and livelihood depends on being right and when being right is more important than your health, that’s when you shouldn’t listen.

If someone tells you that you can’t do something, don’t let their words define YOUR life.

There’s only ONE expert on your body. And it’s not you, although your mind and ego would like you to believe that!

The one expert on your body is your body.

Of course, I always want to leave things on a positive note, so here are two amazing stories of people who didn’t listen to the experts. 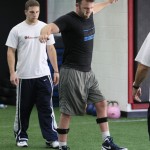 Brock Mealer fractured his T-12 and L-1 vertebrae in a car crash. He was paralyzed from the waist down, and given a one-percent chance of ever walking again. In Brock’s mom’s words, “I knew that Brock would walk again no matter how much doubt they fed us or told us.”

As you can see from the photo, this looks like a man who is walking. And indeed he is. Here’s a link to an inspiring video that tells his story.

Arthur Boorman
Arthur Boorman was a disabled veteran who was injured as a paratrooper in the Gulf War. He was told by his doctors that he would never be able to walk unassisted ever again. He gave up hope, gained weight and was destined to become wheelchair bound.

He turned it around when he discovered yoga. This is an incredibly uplifting story and I’d highly recommend watching the video. It made me misty eyed and I watched it twice in a row, which is not something I usually do as a busy mom, but his story is that inspiring and moving.

Be inspired today and have the courage to stand true to your beliefs. Trust the wisdom of your body no matter what anyone else tells you.